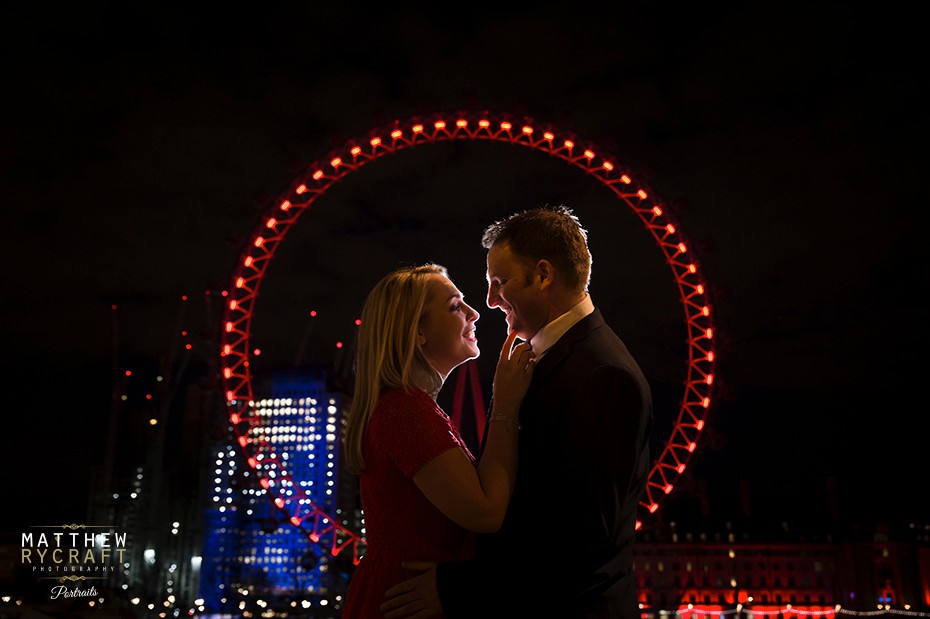 It's not often you get to go to London for a Pre-Wedding shoot, but luckily enough Andy, not only a friend, is himself a wedding photographer and thought this was an opportunity of a lifetime.

Deciding on locations for the Pre-Wedding Shoot

We toyed with the idea of a few locations but we both has always wanted to have a shoot in London, so we both thought this was a great excuse to make it happen.  I wanted to capture the city at night, all lit up in it glory, there’s so much going on around the city, especially by the London Wheel.  We thought it would be great to use photography lighting and create some magical images where the city behind them is lit up.

We landed late afternoon, after a quick tipple and a plan of where we’ll go for a late evening shoot, Andy & Sophie got changed into their evening attire.  I decided as the night shoot was the most important a red dress would be perfect and bright, then got lucky with the London Eye Colouring matching.

On day 2 we hit the streets then headed to the Sky Garden, with an amazing 360 view over the city.  We really made use of the amazing architecture here and the views were stunning. Of course we had to visit Tower Bridge and include Big Ben in their London Pre Wedding Shoot photographs.

If your interested in having a Pre Wedding shoot, despite being a Liverpool wedding photographer I do travel across the UK and more than happy to chat about any ideas you have.  Feel free to get in touch.

Pabs and Adam met online, deciding to go on a date shortly afterwards. They talked for hours over cocktails and, Pabs says, “There was an instant co...

The short answer is months and months of hard work! With the reward being an incredible and beautiful mix of both digital and physical photo albums, p...

Wedding Planning Tips: How to Plan the Perfect Wedding?

Are you planning a wedding? If so, you probably want to make sure that everything goes as smoothly as possible on the big day. This can be a challenge...