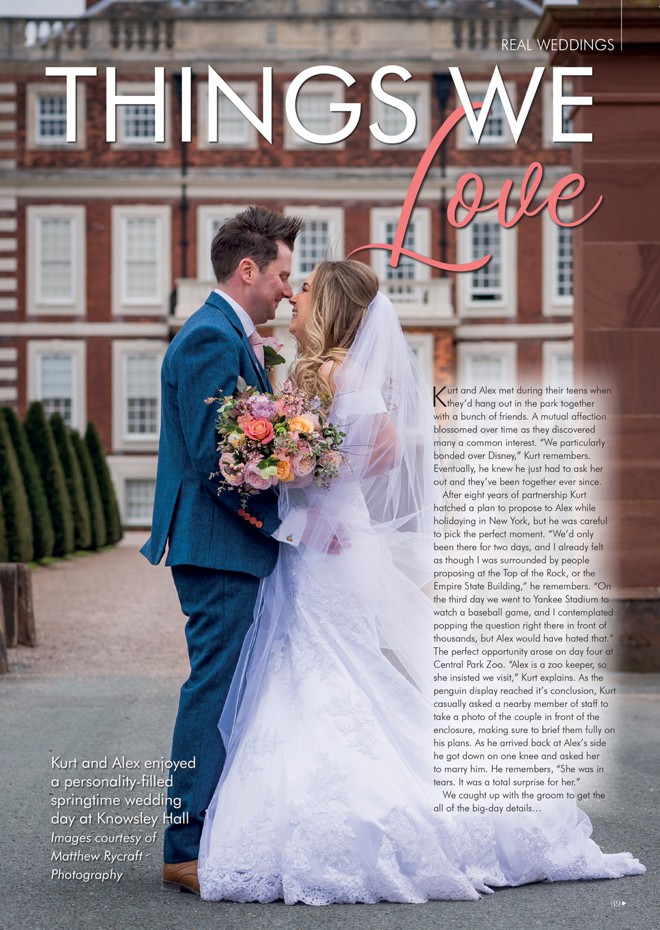 I'm absolutely delighted to be featured in Your Cheshire & Merseyside's Real Weddings. Their article, 'Things We Love' features Kurt & Alex's wedding at one of my favourite Liverpool wedding venues, Knowsley Hall.

Kurt said, "The minute we drove through the gates to be met by the stunning and overwhelmingly big stately home, Knowsley Hall, we fell in love with it. It was hard to believe we were just 10 minutes away from the M57. The staff made us feel like royalty, and answered all of our questions on the spot. Nothing was too much trouble. We left totally satisfied that this was going to be the place for our best day ever."

It's a privilege to be asked to provide yet another set of images for a real wedding feature. My couples love seeing their wedding photographs published in magazines. But for me it's all part of the service and Matthew Rycraft Experience. I have had now had quite a few Knowsley Hall Wedding Magazine Features, so have quite a collection now.

When I told both Alex & Kurt they've been chosen for a Knowsley Hall Wedding Magazine Feature.  they could't contain themselves and were so over the moon.

Kurt and Alex met during their teens when they’d hang out in the park together with a bunch of friends. A mutual affection blossomed over time as they discovered many a common interest. “We particularly bonded over Disney,” Kurt remembers. Eventually, he knew he just had to ask her out and they’ve been together ever since.

After eight years of partnership Kurt hatched a plan to propose to Alex while holidaying in New York, but he was careful to pick the perfect moment. “We’d only been there for two days, and I already felt as though I was surrounded by people proposing at the Top of the Rock, or the Empire State Building,” he remembers. “On the third day we went to Yankee Stadium to watch a baseball game, and I contemplated popping the question right there in front of thousands, but Alex would have hated that.” The perfect opportunity arose on day four at Central Park Zoo. “Alex is a zoo keeper, so she insisted we visit,” Kurt explains. As the penguin display reached it’s conclusion, Kurt casually asked a nearby member of staff to take a photo of the couple in front of the enclosure, making sure to brief them fully on his plans. As he arrived back at Alex’s side he got down on one knee and asked her to marry him. He remembers, “She was in tears. It was a total surprise for her.” 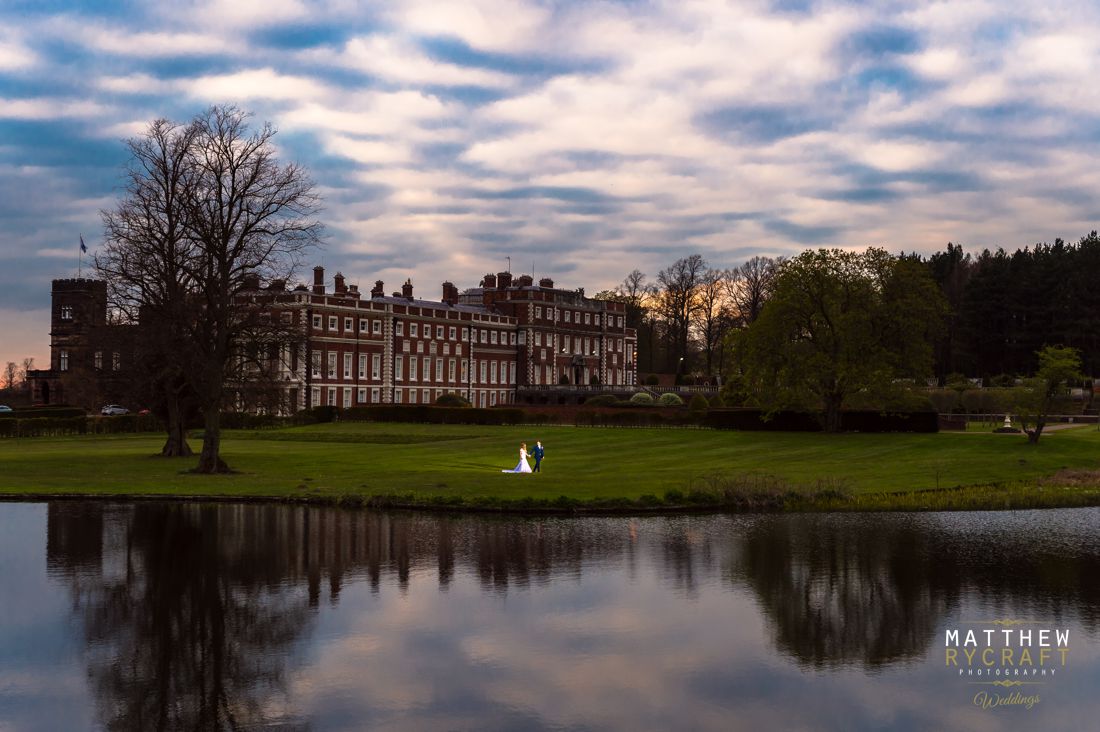 The Grooms point of view

Alex said, “I need to wear a suit every day, so I found it difficult to find one for the wedding that didn’t make me look like I was going to work, particularly as I knew I didn’t want tails. Eventually, I came across The Vintage Suit Hire, who make beautiful tailor-made tweed suits, and fell in love with this blue one.  I accessorised with a stag head pin in my lapel, complemented by a raspberry-coloured wool tie and pocket square. I also wore Daffy Duck cufflinks as I love the Looney Tunes!”

Alex also goes o to say, “As for my groomsmen, father, and father-in-law – they were dressed in matching suits from Slaters. I wanted everybody to be comfortable, and they all looked amazing. Each wore a grey tweed waistcoat to differentiate their look from mine. I really wanted a string quartet so we hired Leo Strings, who were more than happy to play our requests of “Movie” and “Disney” for three hours! They went down a treat with guests and many of them could be seen rejoicing when a particular favourite was played.” 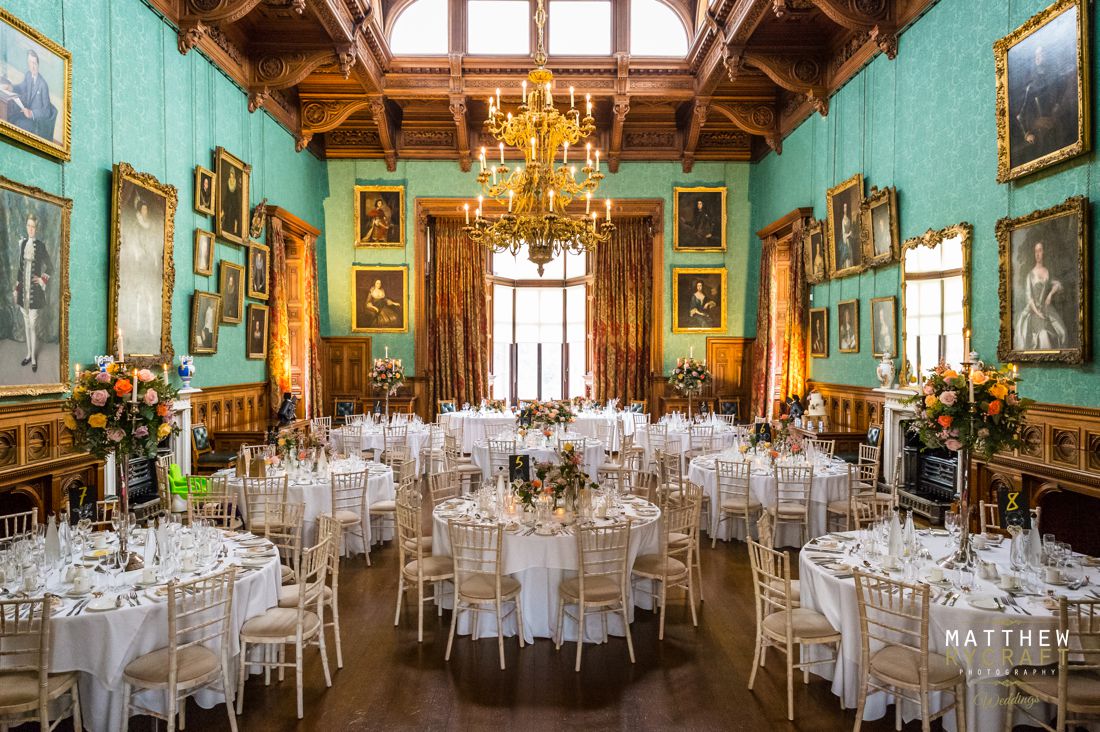 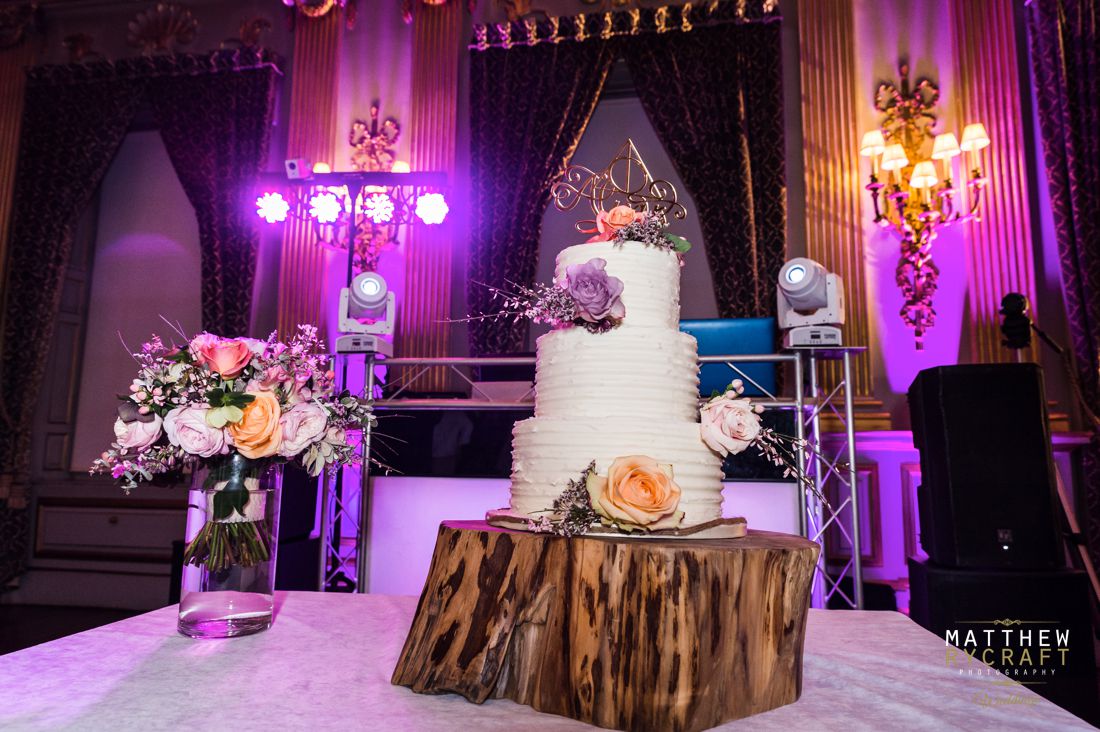 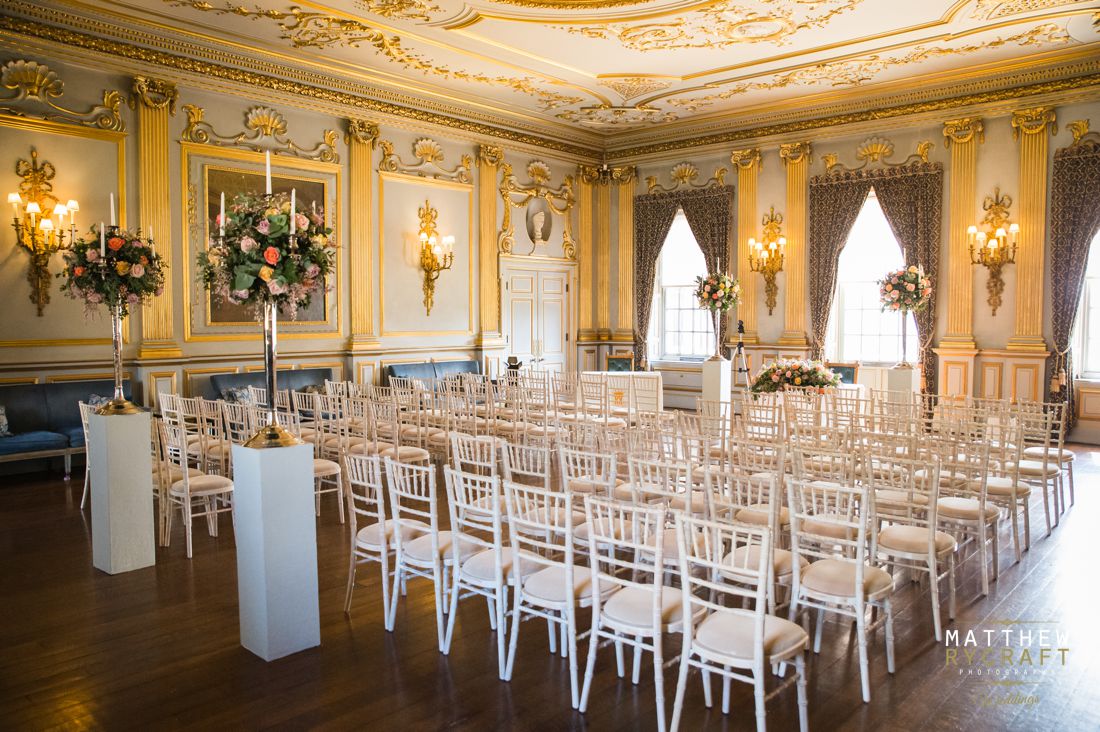 What Alex the Bride Says about her day

Alex went to several boutiques, but said yes to the dress at Natalie Ann Brides in Liverpool. She wore an off-the-shoulder fit and flare gown complemented by a floor-length veil, Swarovski necklace and Irregular Choice Bambi shoes.   She says, “We decided against selecting a theme for our wedding. It would simply be “things we love.” As I’m an art teacher, I designed our signage, table plan, invites, favours, place names, cake topper, and table decorations. Everything was animal themed, tying together both of our jobs and loves – zoo keeping and art!   The centrepieces and flowers added a pop of colour. We’re still receiving complements about them to this day!”

Alex goes on to say, “Our cake was simple, but beautifully made by Sugar Perfection. It was finished with a scattering of flowers, and a cake-topper that read “Always.” We also had a friend of mine, who happens to be part of the Magic Circle, provide entertainment before guests headed into the dining room. He left everyone baffled with cards, coins, and fire!”

The Big Entertainment Group provided a DJ for the evening celebrations, who played all of our 90s requests. We also had a magic mirror, which drew in quite a crowd after a couple  of drinks. 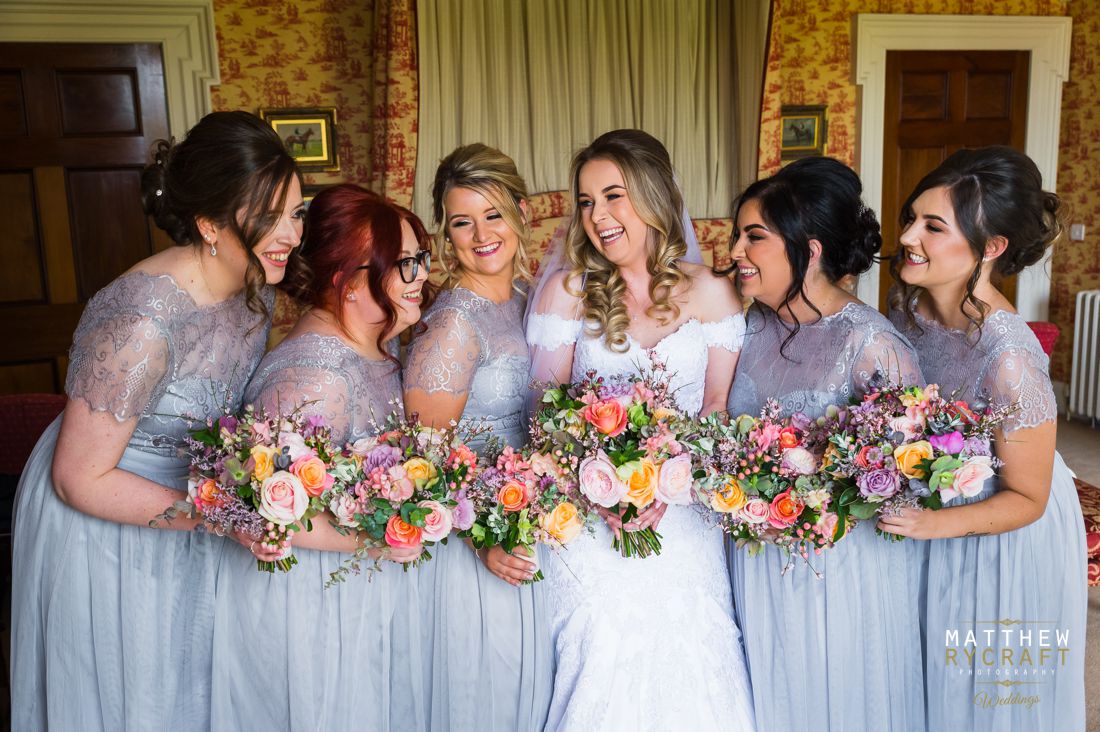 They go on to say, “None of our suppliers could be faulted. They were all exceptional, particularly Matthew Rycraft our photographer and videographer. The story of our day was captured from start to finish in an incredibly professional manner and they both made us feel at ease all day.   We spent our two-week honeymoon in Walt Disney World, Florida. We stayed in the Animal Kingdom hotel for a week and then on to Universal Studios for the second. It fitted in perfectly with our wedding theme since we love Disney so much!”

You may like to a look at some of my wedding magazine articles from over the years. 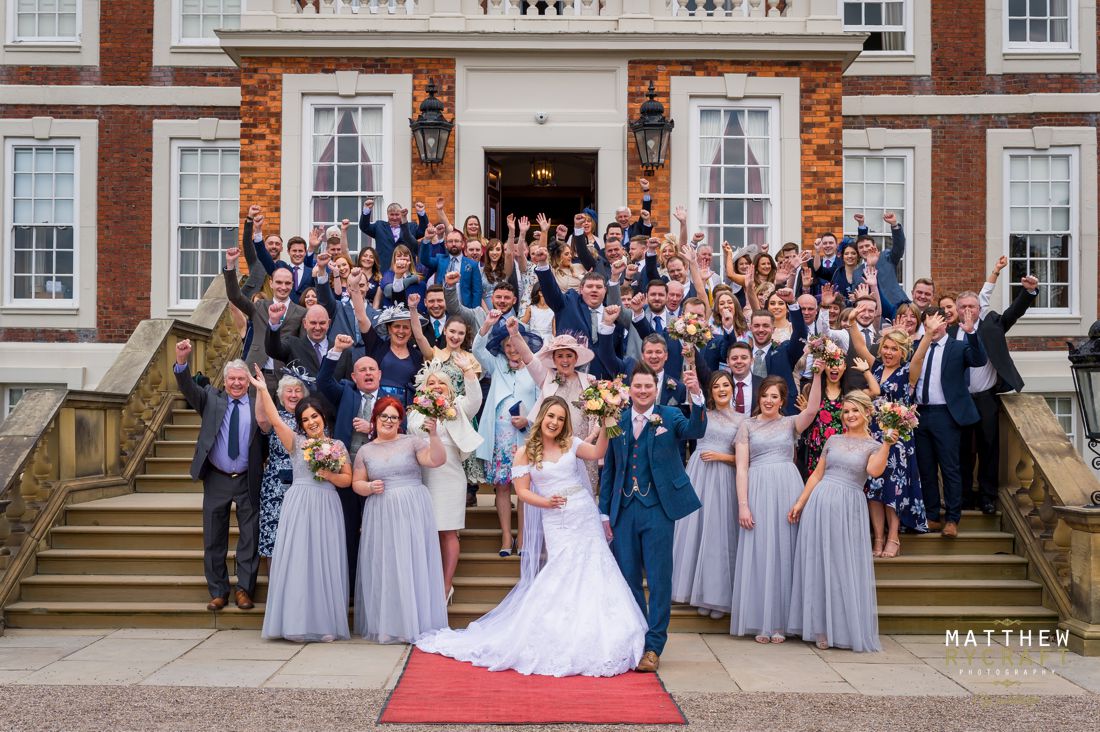 If you want to secure one of the best wedding venues the North West has offer for your big day, why not check out this list of some of Liverpool’s a...

How to choose a theme for your wedding

Your wedding theme will have a huge impact on your big day, as well as the memories that will continue throughout your life. Clearly, it will determin...

Here at Matthew Rycraft Photography, we could recite the usual family wedding picture list in our sleep - couple with all parents, siblings and their ...